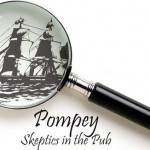 Last Thursday I was very kindly invited to Portsmouth to give my talk on the scientific method to the Portsmouth ‘Skeptics in the Pub’ group. I had a great time, and I think that the subject matter certainly got people talking. I’d like to thank everyone who was very welcoming, my ‘test subjects’ during the evening, and especially to Giles and Trish for looking after me. There are a couple of write-ups of the event here and here, and I understand that it was recorded so perhaps I’ll post that when it’s available. They have a very good set up in Portsmouth, with an interval quiz and free chips, so if you’re on the south coast, I’d recommend going there for their next talk, which is by Chaz Shapiro & Dr Paul Curzon. I’m still keen to give my talk to other skeptic/science groups, so if you’d like me to speak at your event just drop me a line! 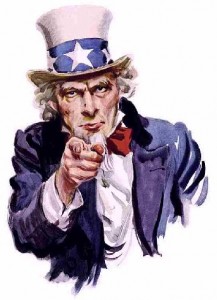 Due a personal creative derth, here's Uncle Sam to ask "Are YOU a skeptic?"

I’ve considered myself to be a skeptic for over a year now, and although I’m very new to the movement, one thing does strike me about it: there seems to be a lack of skeptical outreach, or if you will, ‘skeptical evangelism’. I would really love to see a concerted effort from within the skeptical movement to publicize and promote skepticism, as I believe that it is fantastic, fascinating and fulfilling to be a part of it.

Myself as a skeptic

Curiously, I actually believe that I became a skeptic years before I knew about the skepticism movement. As a kid, I always had an interest in science, and I became especially interested in biochemistry while at school. One element of biology that really caught my eye was the theory of evolution, I loved the way in which it explained the diversity of life on this planet so eloquently and so completely. However, it was from this I learned of opposition to the theory of evolution: the creationists. Web sites like Facebook provided ample room for myself to ‘debate’ with creationists, and I became enthralled by their misunderstanding of science and their never-ending stream of logical fallacies. Following that, I learned of the anti-vaccine movement. I considered them to be a very real danger, as they actively encourage people from denying their children potentially life-saving preventative medicine. As I moved on through academia, my free time dwindled before I eventually submitted my PhD thesis. Following this, I ended up experiencing something called “free time” and I looked for something to fill it. I happened across a flier from the Merseyside Skeptics Society, advertising a talk from Simon Singh. Before the talk, I looked up who the MSS were, researched what ‘skepticism’ was, and it was a joy to behold. Here was a society which was part of a movement where I could engage my interest in creationism, my disdain for the antivax movement, and my love of science. I’ve also learned a huge amount from them too. I’m now quite passionately against alternative medicine and I’ve been proud to play a small part in the 10:23 campaign against homeopathy. I can’t get enough of the ‘Skeptics in the Pub’ talks (I usually pop over to Manchester for the GM Skeptics too) and I felt right at home at the TAM and QED conferences.

What I found most surprising though, was the existence of a movement that completely fitted into my personal belief system, yet I was completely oblivious to it up until about a year ago. Maybe it’s because I was almost totally closeted away in academia for too long, but it has made me think: are skeptics doing enough to tell people about skepticism? In light of this, I’d like to ask fellow skeptics who are reading this to try and spread the work of skepticism. Why not ask your friends “Are you a skeptic?”.

What is a ‘skeptic’?

Sometimes I find it hard to describe what skepticism actually is in a few short, succinct words. I’ve tried “we believe in evidence”, or perhaps “we just question things”. I most commonly get an attempt at comedy along the lines of  “I’m skeptical of that!” but at least it gives people some idea of what skepticism is about. I would love to know what reactions other skeptics get when they reveal their skepticism to others, and if it’s ever caused their friends to become skeptics too.

Perhaps it would be easier to address the problem with a few checklists. Do you think the following are bullshit?

If you answered “yes” to most of those, you could well be a skeptic! However, one of the advantages of skepticism over, say, atheism, is that skepticism is a positive movement. So, if you agree with/have an interest in the following, you could easily identify yourself as a skeptic:

Once again, if you employ these various schools of thought, you could well be thinking like a skeptic!

So, if you have a curiosity about skepticism and want to talk about it with a skeptic, I’d recommend you pop along to your local “Skeptics in the Pub” group. I’ve been to several across the country, and I’ve always received a warm welcome, some friendly banter and interesting conversation. Skeptics are not cynical ogres! Are YOU a skeptic? 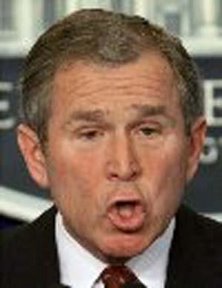