This Saturday morning (April 2nd) sees a Holistic Health Fair come to the Levenshulme Inspire Centre in south Manchester. A variety of bunkum will be on show, including reiki, ear candling, and of course, homeopathy.

Homeopathy needs no introduction from myself (I’ve already given my take on it here) but I’ve not mentioned reiki or ear candling before. Reiki is a form of alternative medicine that is literally hand-waving. Reiki practitioners use the palms of their hands to transfer healing energy (ki) onto their patients, supposedly. Needless to say, a 2008 systematic review from Edzard Ernst concluded that “the evidence is insufficient to suggest that reiki is an effective treatment for any condition”. 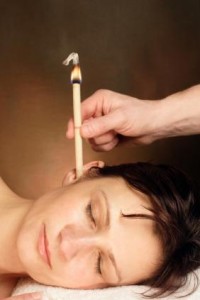 What's wrong with this picture?

So, onto ear candling. This really is one of those alternative ‘treatments’ that defies belief. During an ear candling treatment, the patient lies on their side and a hollow candle is placed vertically over their ear canal. The candle is then lit and allowed to burn. At the end of the treatment, the patient is shown the contents of the burnt out candle so they can see how many ‘impurities’ have been removed from their ear. Unsurprisingly, these impurities are just residue from the candle itself! The practise of ear candling is pretty dangerous too, the hot wax can drip into the patient’s ear and cause damage. There is also the issue of the name. One manufacturer in particular, Biosun, refers to them as “Hopi” ear candles. It won’t surprise you to hear that there is no evidence that the Hopi tribe (who can be found in Arizona) have ever used ear candles.

Anyway, it’s bad enough that this event exists in the first place, but what makes it even worse is the fact that it is being plugged by local Liberal Democrat councillor Simon Ashley. I’ve been a long-term supporter of the Lib Dems, so it’s sad to hear that there is a non-skeptical “it worked for me” woo merchant amongst their midst.

As far as I’m aware it’s free, so if you intend to go you can reply on their facebook page. Sadly I can’t make it, not because I can’t be bothered to get up and get to Manchester for 10am on a Saturday, but because it clashes with the return to 6 music of Adam and Joe (yay!).

Runcorn to get haribo and felching luncheonette and it's hilarious