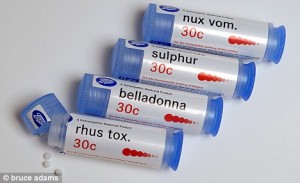 One of the disadvantages of starting a new blog is that all the articles that make your position clear on certain subjects disappear into the ether. Therefore I thought I’d write a few words about one of my favourite topics, homeopathy.

Homeopathy is a form of quackery. It was cooked up by Samuel Hahnemann in 1796, who came up with three “laws” for homeopathy:

Homeopathic preparations are usually made by taking a substance, diluting it multiple times, and succussing each dilution (a process homeopaths like to call potentization). The final dilution is then placed on a sugar pill and left to dry. So usually there is no active ingredient, and there isn’t even any solvent.

And that is pretty much it! The basics of homeopathy.

What do you have against homeopathy?

I have many issues with homeopathy. Firstly, the premise of it is ridiculous. Homeopaths teach that if you dilute something, you make it stronger. Anyone who has ever made a glass of orange squash knows that diluting a solution makes it weaker! Added to that, homeopaths dilute their preparations to an absurd degree:

Homeopathic preparation are diluted using the C (centesimal) scale. In this scale, each ‘C’ preparation is a 1 in 100 dilution of the one before. So, 1C is 1 part of the the original solution to 99 parts solvent. 2C is 1 part 1C to 99 parts solvent, etc. So, every time you go up one C, you are decreasing the concentration of the solution by a factor of 100. Most homeopathic preparations are 30C, which means the original solution is diluted by a factor of 1060.

To appreciate just how dilute this is, we need to consider Avogadro’s constant. This tells us the amount of molecules in one mole of a substance, and is about 6 x 1023. A typical solution will contain 1 mole per liter of solvent (1M), or 6 x 1023 molecules per liter. Every time you dilute it by 1C, you decrease the concentration by a factor of 100, so a 1C dilution of our original solution will contain 6 x 1021 molecules per liter. If you keep going along the C scale, you have less than 1 molecule per liter at 12C. With this perspective, you can see how dilute 30C would be! So, homeopathic preparations above 12C have practically no active ingredients.

However, my major problem with homeopathy is that it can lead to death if used in place of conventional medicine. A list of these occurrences can be found at whatstheharm.net.

Is there any evidence that homeopathy works?

In short, no. There is certainly no reliable scientific evidence that it works. However, in order to define “works” we need to consider two terms, “efficacy” and “effectiveness”. In medicine, a treatment is considered effective if it “does what it says on the tin”, but to qualify as efficacious it must do this in a controlled clinical setting, where the placebo effect can be measured. The placebo effect is considered when judging effectiveness, it is not when judging efficacy.

So, the important question is “how efficacious is homeopathy?”. According to the UK House of Commons Science and Technology Committee’s Evidence Check on homeopathy, it is not efficacious. It merely acts as a placebo. The best evidence for this comes from Randomized Controlled Trials (RCTs). These trials are designed to eliminate the placebo effect and other biases from the trial, so that efficacy can be gaged. While some of these trials do show that homeopathy can work better than placebo, these results are not statistically significant. When these trials are examined with meta studies, homeopathy comes out as being no better than placebo (Shang et al 2005).

Why do people believe homeopathy works?

When someone claims that homeopathy has worked for them, they usually attribute the success of the placebo treatment to one of three things:

Again, the important thing to consider here is quality of evidence. As someone with a scientific background, I like to think that I would place evidence from RCTs in the forefront of my judgment. However, someone who has experienced regression to the mean after taking homeopathy may not understand this, and they will take their own anecdote as evidence for the efficacy of homeopathy. To believe that homeopathy works, you have to put anecdotal evidence ahead of scientific evidence, something that I simply can’t do.

What is being done about homeopathy?

Homeopathy costs the NHS an estimated £4 million per year, and understandably many people are not happy about this. For this reason, and the others mentioned above, the 10:23 campaign was formed. The group promotes homeopathy awareness and campaigns for it’s  removal from the shelfs of Boots, a major UK pharmacy chain. In January 2010, they organized a worldwide demonstration against homeopathy, which saw several hundred people “overdose” on Boots brand homeopathy, to show that there is nothing in it. I wholeheartedly support this campaign, as you can see in the video below. The next demo is planned for the QED conference in February 2011, so see you there!

Of course, I could say so many more things about homeopathy, but this will have to do for now!

Ludlow to get haribo and hand job bistro and it's everything