Hello. If you are reading this, chances are you’re expecting to read about some Internet drama from over two years ago. Well tough, you can’t. I don’t get involved with that kind of thing anymore.

Look, the ESA has just landed a spacecraft on a comet. That’s amazing, awesome and important, why not go and read about that? Perhaps you could sign a petition to stop some local landmarks in my current home city of Liverpool from being demolished? Why not donate some money to charity? If you wanted to, you could listen to my shows where I spend an hour chatting to interesting people about interesting stuff. Or, how about turning the computer off and doing something real? Perhaps you could do that bit of washing that you’ve been putting off, or maybe stop procrastinating and finish your PhD thesis? You could do something even more radical and go outside! Check it out, its in 3D and everything!

OK, OK, OK. I believe in openness and not memory holing things, so if you really want to read about some Internet drama that my foolish younger self got involved in, just keep scrolling.

I mean, come on! You could do something fun! GOG just released X-Wing and TIE Fighter!

How about kittens? You’re on the Internet so you like kittens, right? This place has loads of them! No? OK then, it’s just a little further, I promise…

OK then, here it is. Five minutes of your life that you will never get back. You were warned…

Sigh. The skeptidrama doesn’t stop. I don’t feel happy writing about it, but something has gone down that I feel is serious enough that I just have to write about it. Please, if you’d rather not get involved (and I would have every sympathy if you didn’t) please stop reading now.

PZ Myers is someone I’ve always greatly admired. I’ve loved his fights against creationism and intelligent design, and I’ve admired his brazen no-nonsense approach to things like Eucharist desecration. I was very happy to meet him at TAM London 2010. 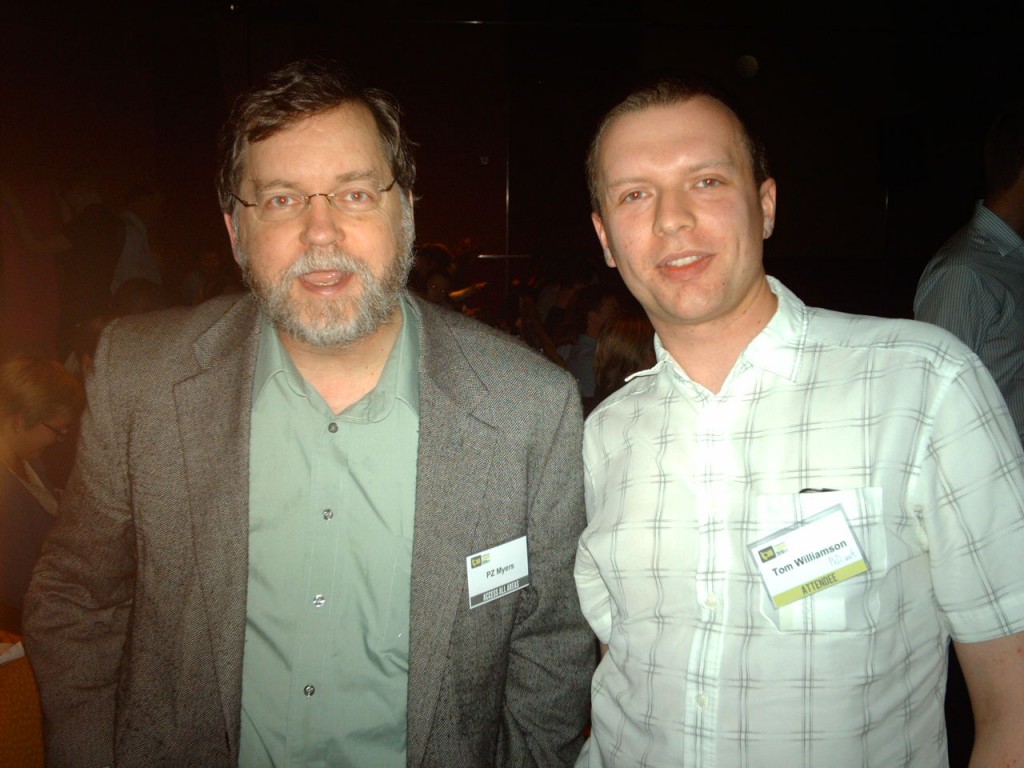 Myself being a pathetic fanboy back in 2010

But now, a fellow skeptic has been incorrectly labelled as someone who uses vulgar gendered insults (specifically c**t) against Rebecca Watson, and PZ is largely to blame. Coffee Loving Skeptic (henceforth referred to as CLS) has given his version of events, complete with actual evidence of what was said and when. PZ Myers has responded with his version, lacking such evidence. Seeing as Rebecca Watson’s tweet was a reply to one of mine, I feel compelled to give my version of events.

I saw a tweet from CLS saying that PZ had blocked him. Seeing as Twitter is a public forum, I thought I’d ask PZ why he did that. Although he was under no obligation to do so (I don’t usually expect a response from celebs on Twitter), he replied saying that he didn’t believe that he had. With two people who I tend to trust saying conflicting things, I thought it might be a Twitter bug (certainly not unknown) and asked CLS to check again. He then provided conclusive evidence that PZ was blocking him. In the meantime, Rebecca Watson had replied to PZ saying that CLS was the guy who called her a c**t, and after he begged to be unblocked called her a c**t again. This is clearly untrue, and possibly a case of mistaken identity. CLS then wrote his blog post where he clearly showed that he DID NOT call Rebecca Watson a c**t. PZ then produced a few tweets mentioning “entitlement”, and went on a rather baffling blocking spree more reminiscent of the climate change denier James Delingpole.

So, why do I care? Why don’t I treat this as a piece of tit-for-tat that just isn’t worth my attention? I care because someone has pretty much been libelled as someone who calls women c**ts, firstly by Rebecca Watson to her 24,000-odd followers, and then by PZ Myers with his 100k followers, when he retweeted her. So combined, Rebecca Watson and PZ Myers have let it be known to about 125,000 Twitter accounts that CLS is someone who uses gendered insults against women, when this is clearly not the case.

It’s also very frustrating that all that’s required from Rebecca Watson (at least if she wants to be civil), is a quick acknowledgement of her error and an apology. Instead, PZ has repeatedly obfuscated the issue by trying to make out that it’s about “entitlement” and moaning about being blocked on Twitter. This is dishonest and evasive. I’ve amended the Twitter exchange to show the sort of thing that would make things so much better:

Is that really too much to ask?