Here in the UK, we are being given an historic opportunity to vote in a referendum on the Alternative Vote (AV) this Thursday, May 5th. It will decide how our MPs are elected in future, and the result will determine whether they are elected with AV or if First Past The Post (FPTP) is retained. As I’ve explained in a previous post, I am very much in favour of adopting AV over FPTP, so in this article I’ll try and address a few important issues that I’ve seen. 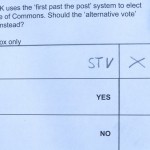 First off, I need to address a potential problem from a few people who want the Single Transferable Vote (STV) instead. Personally, I would prefer STV to AV, but this is not a choice on offer. There is a Facebook group recommending that people write in “STV” on their ballot papers. I cannot stress how stupidly naive this action is. Such papers would be regarded as ‘spoiled’ and not counted, which would only serve to decrease the number of ‘Yes’ votes and therefore help to ‘No’ campaign.

Some would make the argument that voting ‘No’ on Thursday will somehow further the cause of STV. It won’t. A ‘No’ result on Thursday will not be interpreted as ‘People voted against AV so they must want STV’, it will be spun as an endorsement of FPTP, which will kill off any thought of future referendums. If we get a ‘Yes’ vote, it will show the politicians that there is appetite for voting reform in the UK, and it could be a stepping stone for further reform in the future.

Second, the nature of the referendum means that the ‘Yes’ camp needs all the votes it can get, whereas the ‘No’ campaign can win just by encouraging people to stay away. So, by doing any of the following, you are inadvertently supporting the ‘No’ cause:

To get a ‘Yes’ result, we need as many people to vote as possible. It’s very rare that we, the British public, get a chance to vote in a referendum (the last one was to keep EEC membership back in 1975), so make use of the opportunity and vote!