May 5th could be a monumentous day for British politics. As part of the deal which brought us the Con-Dem coalition, the country will go to the polls to vote in a referendum on adopting the Alternative Vote (AV) system for electing MPs. Currently, the first-past-the-post (FPTP) system is used, in which the candidate with the most votes wins.

At first glance, FPTP looks fair enough. However, it’s often the case that the winning candidate scoops less than 50% of the vote, and the returned candidate therefore trots off to parliament with a mandate from less than half of the turnout. AV seeks to redress this problem.

For me, nothing represents how unfair FPTP is than this graph from the last general election (courtesy of allaboutchris.co.uk): 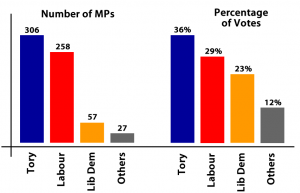 How is it in any way fair that the third largest political party in the UK gets 23% of the votes in an election, yet gets less than 9% of the seats in parliament? Small wonder that the Liberal Democrats want AV!

So, it’s my firm opinion that AV is much fairer and therefore much better than FPTP, so I’m supporting Yes to Fair Votes. However, what about the other side? Is there a case for voting “No” in the referendum? A “No to AV” campaign does exist, and Matthew Elliot, the director of the campaign, has written an opinion piece for the BBC News website.

According to Elliot, the case against AV can be boiled down to a few key points: cost, the Lib Dems being made kingmakers, and politicians clamouring for votes:

Yes, elections are expensive. Adding an extra element to get a fairer election would cost more money. But what price representative democracy? If you are going to argue along the lines of cost, why not turn this country into a military dictatorship and dispense with elections altogether? That would be far cheaper!

After each general election, the UK would face a Hung Parliament and we would have to wait patiently while the Lib Dems played one party off against the other behind closed doors.

Instead of MPs that take a principled stand, AV would create a legion of bland politicians that would tell you whatever you wanted to hear and ditch their promises at the first sign of trouble.

And how would this be any different to how politicians behave now?

Amazingly, this opinion piece doesn’t even attempt to deal with fairness or the will of the electorate. It’s just a series of non sequiturs, and it just sounds a bit desperate to me. In short, vote “Yes” to AV in May!