The guys at the Merseyside Skeptics Society (MSS) have been busy with some world class skeptical activism! The people that brought the ludicrous nature of homeopathy to the world’s attention with the 10:23 campaign have cast their eyes on a wristband made by the company Shuzi. The band makes all sorts of claims, similar to Power Balance bracelets (and we all recall what nonsense they were).

Unimpressed by Shuzi’s claims of it’s “Nano Vibrational Technology” being able to “unclump” and “improve communication” in your blood, the MSS devised a simple but comprehensive protocol to test the Shuzi band. They enlisted the help of a rugby player, who was tested to see how many kicks he could make when we was wearing either a genuine Shuzi band, or a “sham band (a Shuzi band with the “chip” removed). He attempted 50 kicks with and 50 without the band, but what I found impressive about this test was the blinding. In this sort of test, it’s hugely important to remove as many biasses as possible. The bands were covered by a sweatband, so the rugby player did not know which was which, and the identity of each band was kept a secret from the experimenter. The results were unsurprising. When wearing the real band, the player scored 26 out of 50, and with the “sham” band he scored 22. Although he scored more with the real band, this difference is not statistically significant. I’ve taken the liberty to illustrate the results in a graph. 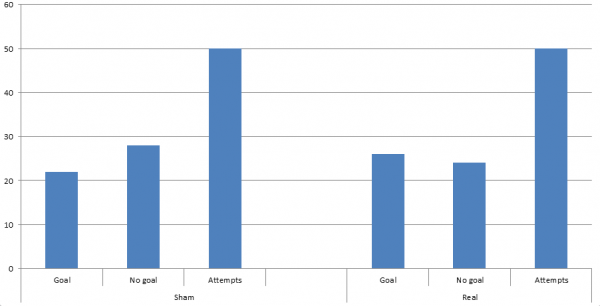 As you can see, the above graph is pretty dull, not really showing much of a difference between the two tests. However, imagine I am a marketeer for Shuzi and I want to make this graph look as good as possible. I could do something like this:

Anyway, it has to be said that they’ve got a good deal of press coverage from this. It’s appeared in the local Liverpool Echo, and even made it onto the Daily Mail of all places, making a nice change from the pseudoscientific guff we are all used to. Job well done guys!