In my last post, I praised Brian Cox for standing up for science and brazenly criticising the “woo-merchants” who promulgate its misunderstanding. This prompted an exchange on Twitter from Fortean UK about ghosts, which you can see below: 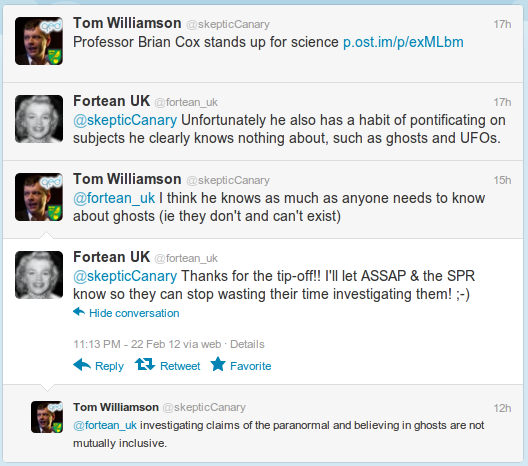 I’m firmly of the opinion that you can dismiss the existence of ghosts without the need to investigate ghost claims. Please allow me to make my point with a simple thought experiment.

Clearly, option 1 could be argued as being correct but rude and not in the least bit helpful. Option 2 is much more preferable, as it gives you the opportunity to educate your friend. However, best of all is option 3 as it will set everyone straight, but it requires the most effort.

So how does this relate to ghosts? Firstly, we need to consider what a ghost is supposed to be. I know that there are differing opinions, but for argument’s sake I shall define a ghost as a manifestation of a dead person. Let’s consider how preposterous this is. The mind of the person would somehow need to keep living even though their body is dead and cold. Science tells us that the human mind is the product of brain activity, so no living brain, no concious mind. That fact alone should make the very concept of ghosts laughable, but even if there was some sort of medium for the mind to be independent of the brain, that mind would somehow then have to manifest itself. How could a ghost appear to and communicate with someone? The list goes on, but I think I’ve made my point. I would even go so far to say that anyone who thinks that there is a possibility of ghosts existing (at least according to my above definition) is either totally ignorant of science or they lack respect for it, just as someone who believes a four sided triangle can exist is either ignorant of or disrespectful towards mathematics.

To that end, ghosts are a four sided triangle.