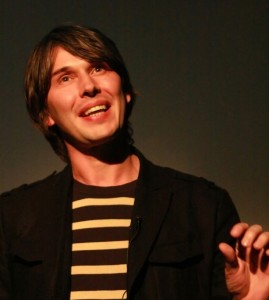 I consider myself to be a passionate supporter of science. I dismay when science comes under attack from people such as alt med pushers, global warming denialists and creationists. That is why I was so heartened to read this blog post by everyone’s favourite physicist, Professor Brian Cox, entitled “Why Quantum Theory Is So Misunderstood”.

I’m not going to talk about quantum theory too much, as I don’t really understand it (hopefully Richard Feynman would be proud), but what really impressed me about this article is Cox’s almost ruthless attitude to those that would take ‘quantum theory’ and besmirch it’s good name by using it to justify almost any new-age piece of nonsense. Deepak Chopra, I’m thinking of you!

Although countless woo-mongers misappropriate quantum physics to sell tomes of drivel, I agree with Cox that this should not deter people from making science a part of popular culture. I think that any ideas along the lines of “it’s too complicated for the great unwashed” are deeply patronising, and you only have to look at the popularity of the “Wonders” series to see that there is a demand for science programmes.

Having said that, I’m of the opinion that the scientific method itself is often poorly communicated, leaving many people without a solid grounding in what science actually is (hence why I give talks on the scientific method). Therefore, it’s too easy for people like global warming denialists to muddy the waters by claiming that there is a “debate” on climate change. Antivaccinationists find it too simple to ensnare people with distorted statistics and scare stories about the perils of vaccination, and creationists all too often exploit a lack of understanding of terms such as “theory”. After all, evolution is “only a theory”. I think we need to have more confidence in teaching science and treat it as something to be embraced, not feared.

Finally, it’s refreshing to see such an eminent scientist be so unequivocal about the role and achievements of science:

Our civilization was built on the foundations of reason and rational thinking embodied in the scientific method, and our future depends on the widespread acceptance of science as THE ONLY WAY WE HAVE to meet many, if not all, of the great challenges we face.

If you doubt that sentiment think about what, we humanity has achieved through science. Smallpox, a disease that once scourged the planet, was defeated with the use of vaccines, not homeopathy. Modern telecommunication methods make the world that much smaller, and they were developed with science, not with wishful thinking. The application of science allowed us to leave this planet entirely, we did not put men on the surface of the Moon through prayer.

So let’s stand up for science like Professor Brian Cox does!