You may remember a few months ago when I blogged about the vile racist tweets of Liam O’Donoughoe.  Well, the latest piece of racism I’ve spotted comes not from the world of football, but from the account of a Labour MP and member of the shadow cabinet, Diane Abbott.

You’ll notice the sweeping ‘white people’ generalisation. It’s accompanied with  ‘#tacticasoldascolonialism’, a contraction of “tactic as old as colonialism”. So, it looks very much like the MP is saying that white people are colonialists who want to divide and rule. To judge any group of people based on their skin colour, as Diane Abbott has done here, is racism, plain and simple. But perhaps I’m being too hasty. Maybe I’ve taken this out of context. Let’s see: 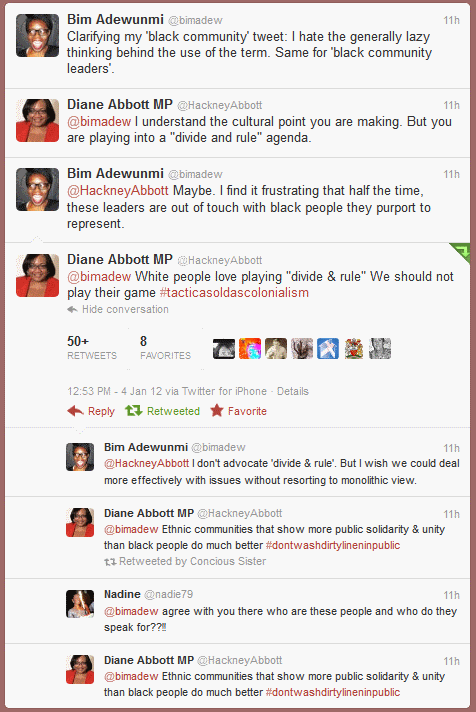 Perhaps not. Obviously I can’t speak of much experience with this matter, but it seems that Bim Adewunmi commences by making a quite reasonable tweet about her feelings about certain terms. Then Abbott wields out the ‘divide and conquer’ line. Bim then follows up by commenting that some so called ‘community leaders’ don’t represent the people they are supposed to represent. As an MP, I would have thought Diane Abbott would have been very familiar with that concept! But no, Abbott continues with the idea of ‘solidarity’ being more important than expressing one’s views.

I’d just like to make a couple of points here: firstly, I believe it’s wrong to stop someone voicing valid concerns because you want everyone to ‘pull together’, ‘tow the party line’, or whatever expression you want to use. I find the idea of that to be totally undemocratic. Second (and I know this is an idealistic position), I do get a bit disheartened by talk of different ‘communities’, especially when people like Diane Abbott appear to foster an ‘us versus them’ attitude. Are we not all people?

Anyway, the point of this post is that Diane Abbott has made some racist tweets. I hope the Labour party takes some sort of action.

I also consider it to be a great shame, because before those tweets Abbott was using Twitter to espouse her rationalism in promoting the MMR vaccine. More of that from all MPs would be very welcome.

Incidentally, I’m a paid up Liberal Democrat. I’d be absolutely disgusted if a party member told me I couldn’t say anything about Nick Clegg’s position on tuition fees.

EDIT: Abbott has since apologised. Also, thanks to everyone for pointing out the hashtag!