I was hoping my first blog post about football would be somewhat more jovial than this, but it’s a subject that I take very seriously and it’s something I feel I need to add my two cents on: a Norwich City ‘fan’ has been banned from Carrow Road for life after making racially offensive comments towards new Norwich signing James Vaughn on Twitter. The story has been covered by both the Pink’un and the BBC. However, I saw the original offensive tweet and I’ve been following this ever since, and I feel I need to clear a few things up and give a few more details. What follows is my account of what happened:

NB This account is based on the proviso that everyone on Twitter is who they say they are, and all reported tweets are accurate. If it’s later shown that anything is inaccurate or that certain Twitter accounts have been hacked or are in a false name, I will of course correct the article.

The Case For the Prosecution

I follow the #ncfc hashtag on Twitter to get the latest news and opinions on the happenings at Norwich City FC, a team I’ve supported from the age of ten. In amongst the transfer rumours and good humoured banter, I was shocked and disgusted to read this tweet from @ODonoughoe, in reference to James Vaughn (beware, it contains some extremely nasty racist language, I’m not sure I feel comfortable repeating it):

@David_Tree He’s a f**king useless chav. Did f**k all at Palace last season and he’s another f**king nigger on the team we don’t need.

This tweet was quickly picked up on by myself and fellow Norwich fans who find racism deplorable. Rather than apologising for his actions, @ODonoughoe deleted the tweet fairly quickly and went on the defensive, tweeting things like “show me where I was racist”, “I’ve been misrepresented” and “it was taken out of context” etc. However, when quizzed about the issue it was pretty clear that he was unrepentant: 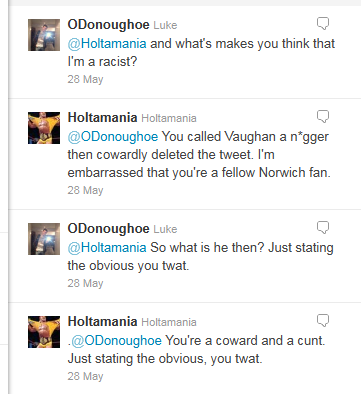 Again, rather than apologise or simply stop, @ODonoughoe continued to dig a deeper hole for himself by claiming he was proud of Norwich City because most of the team were ‘White British’. While a few made the point that to be proud of being British is nationalistic, and being proud of being white is racist, @ODonoughoe explained himself thusly on more than one occasion:

So, according to Luke, there is no such thing as ‘Black British’. And he claims to not be a racist, remember.

I believe that had Luke just deleted the original tweet and left it at that, the whole thing might have blown over. However, former player and current pundit Mark Bright caused a bit of a stir when he seemingly out of nowhere declared that he didn’t want any Norwich fans following him, and that he would block any that did (this reportedly included Dion Dublin). That lead to a lot of head scratching and puzzlement from Bright’s followers, but after a few hours the beans were spilled and it was clear that @MarkBrighty was understandably unhappy at the actions of @ODonoughoe. This brought the matter to the attention of many, and the tweets of @ODonoughoe were shown to a wider audience. Following complaints to Norwich City FC by the fans, the matter was investigated and @ODonoughoe banned for life from Carrow Road.

I’d like to congratulate Norwich City FC for being right on the money with this decision. Racism should have no place within today’s society at all, yet alone football. I rather hoped that the odious attitude of @ODonoughoe had been left in the past with the banana throwing and monkey chanting, and the life time ban is totally appropriate given the nature of his actions. I’d like to congratulate all the true NCFC fans who reported him.

As for Mark Bright, I’ve got mixed feelings. Tarring every Norwich fan with the same brush as one racist fan is completely wrong, and I’d like to know why he took so long to tell people why he was upset with Norwich City fans. Was it to build up a sense of drama and mystery before the big reveal? Who knows.

However, even though the tweets of @ODonoughoe give the impression of an unrepentant racist, he has at least attempted to be laudable. First off, he did try to offer an apology to James Vaughn (tweets are in real time so they are in the order of last to first): 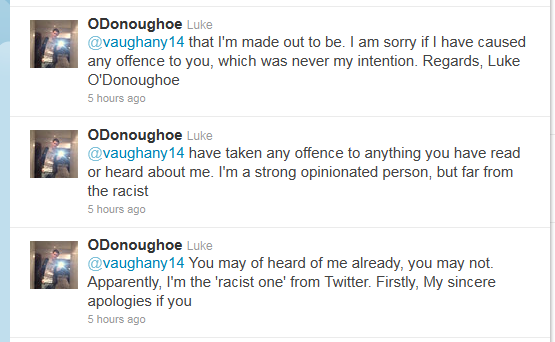 I find this to be a very half-hearted apology. He’s apologising for if he caused offence, yet he doesn’t recognise where or why he caused offence. There is no sign of any lessons learned here. However, here is something that I actually agree with:

Quite right. I for one as a Norwich fan do not wish to be associated with the vile attitude of @ODonoughoe, and I’m sure everyone else on the #ncfc hashtag would agree with me.

So, hopefully you’ve now got the full story. You may be wondering “Why bring this up at all? It’s an ugly matter which detracts from the fact that Norwich City is a friendly family club and it just makes us look bad”. I feel it’s important to properly address the actions of @ODonoughoe, to show that he’s not been treated unfairly, this is not a case of ‘PC gone mad’, misrepresentation or any other right wing persecution fantasy. I feel very strongly about this, and if I can do something to keep racists out of the game then I will. There is an amazing atmosphere at Carrow Road, and I don’t want it soured by a few small minded bigots. As we go boldly in the Premier league, let us do so with a positive attitude, safe in the knowledge that our club is doing it’s best to stay a family club. OTBC!