Thought of this at lunchtime, just had to throw it together: 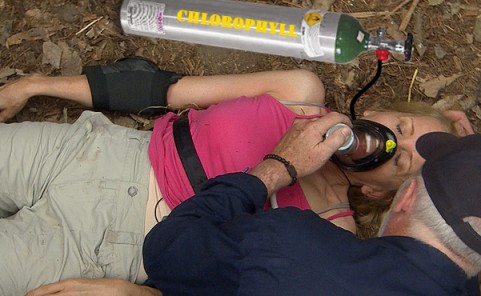 Sorry if I seem a tad obsessed by not-a-Dr Gillian McKeith on IACGMOOH, but rarely is TV this karmic (and no, I don’t believe in Karma, thanks).

So far, the diminutive quack has been voted to take part in every bush tucker trial she has been eligible for. The first was a piece of TV gold which saw her freaking out, fainting (despite adjusting her clothing), and being given oxygen. Her performances improved slightly as the week wore on, but last night saw her reach a new zenith of crappiness. She was first required to command a digger and retrieve some buried stars. Mistakes would be punished with a swift dispatch of insects to the head, so she didn’t even attempt the trial. Didn’t even try. Pathetic.

However, the best was yet to come, when the first live bush tucker trial of the series commenced. Unsurprisingly, McKeith came top in the public vote, but as she got up to talk to Ant and Dec, she “fainted”, once again requiring medical attention. Following a hasty commercial break, the hosts announced that Gillian would not be doing the trial, and that anyone who called in to vote for her could get a refund. I bet the ITV paymasters were happy about that! Here it is again in case you missed it: