OK, it’s time for the annual QED write up! QED this year was on the weekend of the 13th of October, and in case you haven’t heard of it, it’s a big ol’ skeptic conference that sees skeptics from all over the world congregate for a weekend of fun, revelry, activism and informative entertainment.

I turned up on the Friday morning, checked into my Airbnb and headed for lunch at my favourite Japanese restaurant in Manchester. After a hearty sushi lunch, it was time for the Skepticamp, a QED fringe event put on every year by Chris Higgins. It gives a diverse range of speakers the chance to give a talk in an “Ignite” format, that is ten minutes with another five for Q and A. Like all ignites, your slides advance after a set time, always fun! Naturally, the subject of my talk was flags, but I went with something a little different this time. Usually I talk about the history of national flags, or maybe flag design, but in my Skepticamp talk I conducted a whistle-stop tour of the multitude of LGBT+ pride flags, my favourite of which I have to say is the flag of the Bear Brotherhood.

I was intending to spend the whole of the Friday in the bar at the mixer, catching up with old friends and making new ones who were previously just avatars on Twitter. However, I was informed that the crew from Liverpool-based virtual reality company VR Here had set up, so I went upstairs to have a go. I absolutely loved it. I’d heard of a game called “the plank”, where in the virtual world you go up twenty floors, and then walk along a plank to get some doughnuts. They make the experience a little bit more real by getting you to walk along an actual plank that they place in the middle of the room. I fell off, and in the virtual world I would have made quite the impression on the pavement, but I didn’t find it nearly as disorientating as others, maybe because I’d already seen others do it, I don’t know. Anyway, I liked it so much that I signed up for another session the next morning. I spent the rest of the evening chatting to folks in the bar, including someone who had heard and enjoyed our Simpsons and history podcast Retrospecticus, which was nice.

I was relatively well behaved on the Friday night, and unlike other years, I managed to get there bright and early for the Saturday morning opening session. I am so glad that I did. Every year they have an opening video, and this year’s was absolutely the best yet. It featured David Attenborough (not really) tell the story of skeptics migrating to QED. It’s brilliant, check it out below:

After a disappointingly deflating opening talk from George Hrab, I went upstairs for my second VR session. I shared it with my friend Kat Ford, who hadn’t experienced “the plank” before. So far, I can’t decide which is more fun: doing “the plank” yourself or watching other people try it. After Kat finished her go, possibly my favourite little moment of the weekend happened. The guy who went after us was wondering what all the fuss was about. He very confidently marched half way across the plank, panicked, then inexplicably threw himself against the wall! Talk about pride before a fall!

After that I was intending to go the video game panel, but after seeing the queue going round the corner I went to what was marginally my second choice, which was Hannah Fry talking about algorithms. I loved the talk, especially the bit about pigeons being trained to diagnose cancer.

After lunch I went to the workshop on critical thinking, hosted by Marianne Talbot. That was a real eye-opener, as I’ve identified as a skeptic for some years but I’ve never done any formal studying of critical thinking (for shame!). It was really interesting to examine what makes an argument, and I learned a new word: enthymeme.

Later that afternoon I had the pleasure of seeing podcaster Thomas Smith interview solicitor and former QED opener Emma McClure. It was an informative discussion on the prison systems of the US and UK, I’m looking forward to hearing it again when the podcast is released.

After that everyone went to the main hall to see a talk from neurologist Steve Novella. I really dislike what I call “consciousness woo”, which is a series of wishy-washy silly hypotheses and statements that try and demonstrate that there is something to consciousness that is beyond the physical. Dr Novella took apart all the supernatural bunk really well, it was a pleasure to see.

After dinner it was time for the Ockham awards. Only two this year (thankfully, sorry but I find award ceremonies interminable). The award for skeptical activist of the year went to Michael Marshall of the Good Thinking Society, a hugely worthy winner. Marsh does great skeptical activism there, chuck them a few quid if you can. The rusty razor went to Not-a-doctor Andrew Wakefield, presumably for his twenty-year-long effort to stop parents from vaccinating their children against measles. Bastard.

After some solid comedy from Alun Cochrane, I retired to the bar for an evening of friendly and stimulating chat. I was all set to retire at 2am, when Kat said “Karaoke?” and I got a second wind. In my stupor I subjected the Saturday night revellers to my rendition of “You’re the voice” by John Farnham. Video evidence of this exists for some reason, but please, leave it buried! I hopped in a cab at 4am and somehow managed to do what I do best: make an Alan Partridge meme: 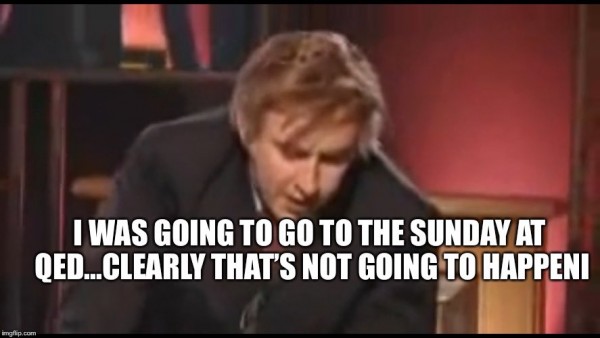 So yeah, 9:30am on the Sunday morning wasn’t going to happen for me. I did however manage to to haul myself to the “Truth Hertz” panel, and I’m very glad I did. It was a great discussion on all things musical, with the most interesting stuff coming from Milton Mermikides (I really must read more about 432 hertz truthers).

After that I enjoyed another podcast recording, this time courtesy of the European Skeptics. It was great fun, Brian Eggo is hilarious, and all the free sweets and booze were delicious, with the exception of the Swedish salty liquorice, which according to Skeptic magazine editor Deborah Hyde, tasted worse than a badger. Keep an eye on the European Skeptics website for the show.

Following that there was a schedule change in the main hall. One of the main stage speakers pulled out at the last minute, so Paul Duncan McGarrity’s “A Practical Guide to Attacking Castles” was moved from the workshop track to the main stage. He belonged there. It was a tour de force of medieval history, comedy, and sword-inflicted injuries. If he’s anywhere near you, go and see it, it’s great!

The all too fleeting weekend was brought to a close with an excellent talk on the science of laughter by Professor Sophie Scott, a great way to round everything off. Following this, Mike Hall gave his traditional closing remarks before the organisers got their very much deserved standing ovation. Sadly yet understandably, QED is taking a break next year, so they will be back in 2020. See you then!

Also, I should say I’m not great with words. Someone who is much better with them is Jonathan Jarry, who has written a great piece on what makes QED so special. It echoes my thoughts exactly, go and read it!