So, the QED conference is all done and dusted for 2016, and I think it’s fair to say I had a blast! There are various other reviews and musings on QED 2016 out there already, but seeing as I spent most of my time outside of the main room (due to a combination of competing interests and general lethargy I only managed to sit through two of the main talks) I thought I’d add my voice to the satisfied cacophony.

Before I start I should say that I got to talk to plenty of friends old and new, but I managed to miss lots of people who I wanted to catch up with. So, if I don’t mention you in this blog or miss out on your talk/event, please don’t take it personally!

My personal highlights all came on the Friday. I managed to get the day off work so turned up promptly for the start of the Skepticamp (kudos to Chris Higgins for getting it all organised). I enjoyed all the morning talks, especially the one that concluded the session by addressing cannibalism. After that, we went for lunch. Unfortunately lunch took a bit longer than expected, so I missed the first couple of talks of the afternoon session. I really, really hate doing that so unreserved apologies to the speakers I missed.

I delivered the penultimate planned talk, regaling the audience with the story of wisdomofchopra.com, a Deepak Chopra quote generator I made in an evening that was later used in an academic study of bullshit receptivity. Before I started I asked for a cheer from everyone not from the UK, and I’m happy to say that I got a very enthusiastic response! I was worried that the whole Brexit ugliness would put people off travelling to the UK, but as it happens I was informed that the weak pound has some advantages. I’m pretty sure my talk was well received and it was definitely the right audience, it’s not everyday that I put up a slide containing a block of code and get a laugh without having to explain it! So, onto my first personal highlight. We got 5 minutes of Q and A, and the first questioner at the end of my talk was kind enough to inform me that  the study that used quotes from wisdomofchopra.com won an IgNobel prize! I really wasn’t prepared for that, I’m not sure whether to feel pride or shame! 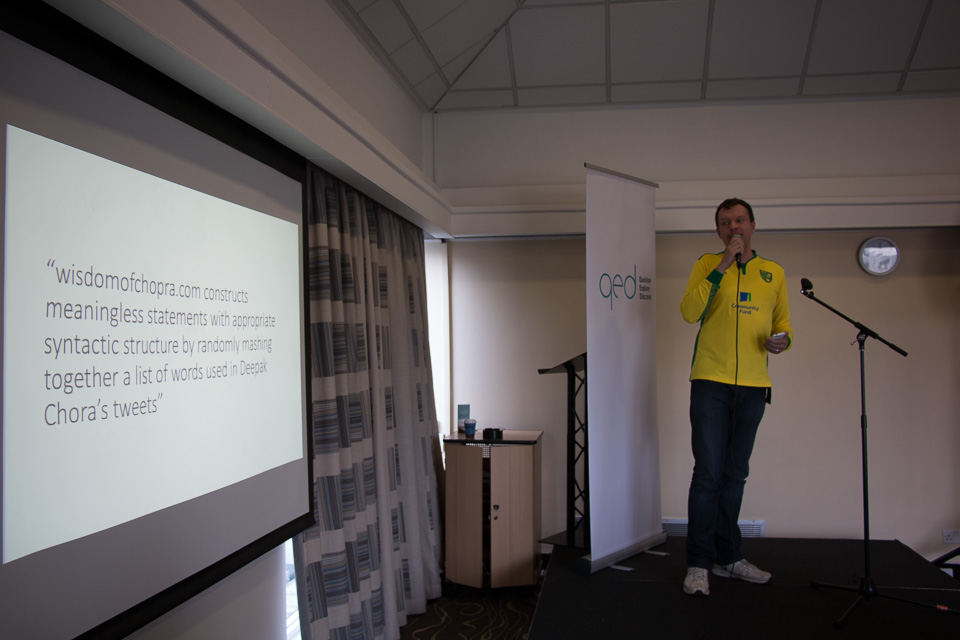 Talking about wisdomofchopra.com at the Skepticamp

Once the Skepticamp was wrapped up I needed to check in to my hotel. Oh dear. I was only paying £30 a night so I wasn’t expecting much, but as soon as I got in I noticed the Christmas decorations. Not a good sign. Neither was the handwritten one on the wall explaining that the decorations were up because a film crew was filming a Christmas show there. I mean, I was hardly tripping up over rigging or anything. Apart from that, the carpets were worn, wallpaper was peeling off, but it worked as a place to crash so not all bad.

After that I headed to the much anticipated Friday night pub quiz, hosted by QI elf and former show guest (yes, I used to have a show!) Stevyn Colgan. I’m a bit of a quizzer and this one was top notch, but then again I would say that because my team, “Breakfast means breakfast”, managed to win the bloody thing! We paraded our trophies around the hotel in triumph, superb! 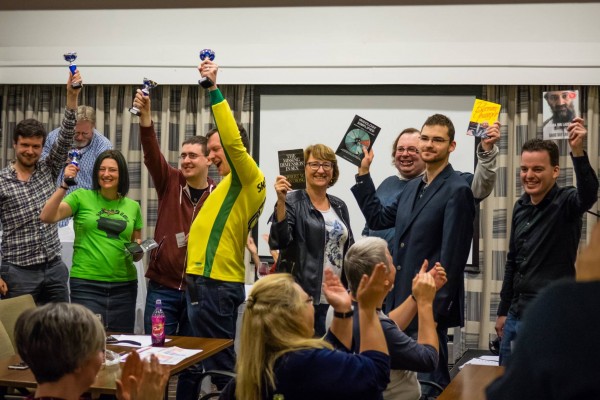 Following that I headed for the mixer, chatting with skeptical friends from all over the place, late into the night.

Probably a bit too late into the night. I got up at a reasonable time but spent too long picking over a full English breakfast so I managed to miss the first talk. Never mind I thought, I was guaranteed a front row seat for the “Dental woo” panel. Dentistry is a subject that doesn’t get that much press in the skeptisphere, and despite being in a zombie-like state I enjoyed hearing about fluoridation scares, the problems with dental research and a particularly disgusting demo of oil pulling. Don’t worry, despite it’s rather terrifying name, oil pulling just involves swilling cooking oil around your mouth for a bit. Revolting, but probably not that dangerous.

Following the panel we were all spoilt for choice, with no more that FIVE things to chose from! I plumped for a live “Skeptics with a K” recording. The room was packed so I slotted in at the back somewhere. I couldn’t see much but it’s audio init? I managed to embarrass myself by asking a nonsensical question and almost falling off my chair. Looking forward to hearing it when it comes out as a podcast. :/

After lunch I sat my arse down in the film room to “enjoy” a screening of Expelled: No Intelligence Allowed, the creationist propaganda film by Ben Stein, the bloke from “Ferris Bueller’s Day Off”. Thing is, if I was watching it at home on Youtube, I’d switch it off after 10 minutes in a minor fit of rage. However, watching it with two dozen others felt like a form of group therapy, with everyone throwing their heads in their hands and screaming “noooooo” in unison. Don’t get me wrong, the film is absolute unrelenting shite, but I somehow feel richer for having experienced it.

From there I moved on to the “Skeptical Activism Under the Microscope” panel. There have been quite a few skeptic wins in recent times, and it was good to note these wins as well as consider how things can be done better in future. Following that was the keynote from Dr Karl, who offered the audience a whistle-stop tour of various moments in science, both serious and silly. I particularly enjoyed the dig at the bloody stupid “paleo” diet!

For the first time ever I didn’t go to the gala dinner as I dilly-dallied with my booking and of course the dinner sells out in 24 hours. However, instead I hooked up with a bunch of Norwich skeptics/Last Tuesday Project contributors for a very pleasant curry. Nice to make a joke about Little Melton that didn’t fall on deaf ears! I also got to meet Natalie Newell from A Science Enthusiast (amongst other things) and I got the chance to personally thank her for giving me the opportunity to design the flag for the Confederacy of Douchecanoes (long story). 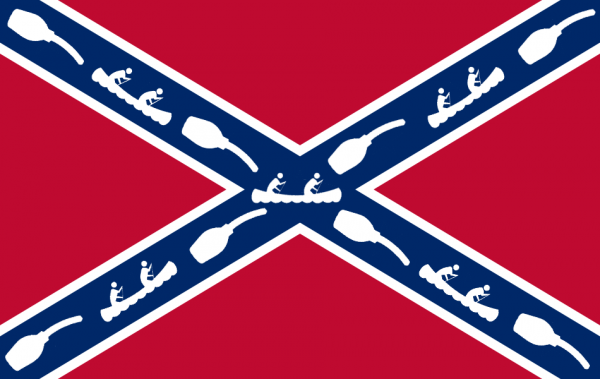 Flag of the Confederacy of Douchecanoes

We sauntered into the evening entertainment and managed to miss the Ockham awards, but took our seats in time to witness the annual worshipping of the cloth chicken, before taking part in a huge card trick which worked for nearly everyone. The first act, Grace Petrie can consider myself a new fan. I loved her songs, especially one called “Ivy” which really hit home with me. We were then entertained by a great set from magician Dave Alnwick, I can’t wait to see him do his thing in Liverpool next month! Comedian Tiernan Douieb brought the evening to an end, but I couldn’t hear that much of his set thanks to the dickheads at the back who decided to have a loud obnoxious conversation. Thanks for that guys. Anyway, I retreated to the bar to have some more quality conversations and before I could say “Wait, what time is it?” it was past two again. Whoops!

So once again I didn’t wake in the best states of mind. I checked out of my dank hovel, but the weather had reverted to the Manchester default of “heavy rain”. After a quick detour into a newsagents for a Mars Bar breakfast, I arrived at the hotel tired, hungover, hungry and soaked through. I stumbled into the middle of Cara Santa Maria’s talk and attempted to tune in, but after five minutes and a mention of the Bechdel test I gave up and went in search of coffee, which I somehow failed to find.

Following that I was originally planning to go to the magic workshop hosted by Dave Alnwick, but I figured that it would be packed following his triumphant Saturday night spot. Added to that, my hand eye coordination has always been sub par, so wanting to make the least amount of effort I plumped for the showing of the original Ghostbusters, a film which I realised I have never sat down and watched from beginning to end. And guess what? I was the only person who did! It was great, I took in the film, stuffed my face with free popcorn and just took the chance to relax. Good stuff! I was also keeping one eye on Twitter and saw all the reactions to Sally Le Page’s talk about duck reproduction. I was quite glad I wasn’t there as I didn’t feel up to that, it was too early for 15 foot high genitalia. 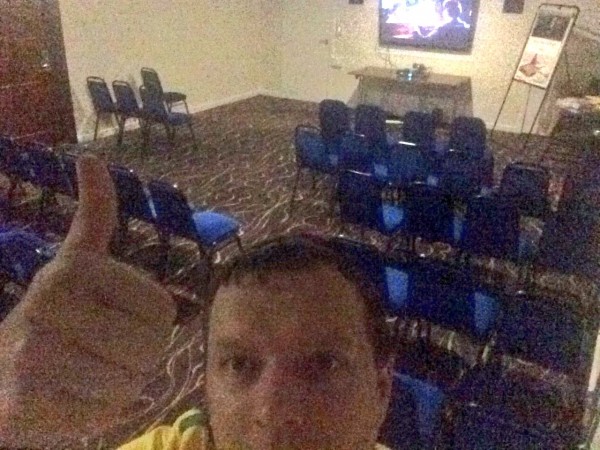 Enjoying a private screening of Ghostbusters

Feeling recharged, I set off for the final two panels of the conference. These were easily the most interesting ones for me. The first was entitled “The march of unreason” and it saw QED dabbling in politics for the first time. There was so much to discuss in regards to the Brexit referendum and politics in general that it barely scratched the surface, I’d love to see more of this sort of thing in the future. In the Q and A I asked why politics was a taboo subject in skepticism and I wasn’t exactly satisfied with my answer. I’m a strong believer that politics and politicians should definitely fall under the umbrella of skeptical enquiry. After all, if there is one subject that is full of bullshit, it’s politics!

Following that was a panel on “Legal Name Fraud”, a form of legal woo (you might have seen the anonymous billboards throughout the UK). This was the panel I learned the most from. People have tried to explain the “Freeman of the land” stuff to me before, but it always makes my brain explode. This panel explained everything patiently and concisely, and thanks to Geoff Whelan I have a whole new rabbit hole to get lost in!

The event was concluded with a talk from Meirion Jones about his investigation into fake bomb detectors, which for me was a familiar and utterly tragic story, a poignant note to end on. After all the congratulations had died down I quickly escaped and just about managed to make the train and hurried back to my family, so sorry if my departure seemed rather abrupt.

Overall this was a great QED. I’m looking forward to next year, but I think I’ll book a different hotel!