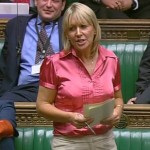 You’ve just got to love Nadine Dorries. The conservative MP for Mid Bedfordshire has been in the sights of people like Tim Ireland for quite awhile now, thanks to her irrational stances on issues such as abortion, and for claiming that her own blog is “70% fiction”.

As a result of Dorries stance on abortion and her position on sex education, New Humanist magazine have included her as a nominee in their annual Bad Faith awards. Naturally, Dorries hasn’t taken too kindly to it, and the other day squeezed out a short post on humanists on her blog:

I am not sure why anyone would admit to being a humanist and part of an organisation which has such extreme views. A humanist recently commented that, not only did he believe that abortion was acceptable right up to the moment of birth, but that termination of a child’s life was acceptable up until the point where the child had the ability to reason, understand and justify life.

At first, it looks like Dorries is basing her opinion on a rather large group of people based on nothing but rumour (and I’m not editorialising, that one quote is about half of the whole blog post). Obviously it’s easy to tell the glaring logical errors Dorries is making at this point, but it gets worse. Dorries felt the need to clarify her position and even name the person in question as the philosopher Peter Singer:

In 1979 he wrote, “Human babies are not born self-aware, or capable of grasping that they exist over time. They are not persons”; therefore, “the life of a newborn is of less value than the life of a pig, a dog, or a chimpanzee.”

In 1993 he stated that no newborn should be considered a person until 30 days after birth and that the attending physician should kill some disabled babies on the spot.

OK, a few issues here. Firstly, this is Peter Singer we are talking about, it’s very involved and complicated philosophy, it’s not something you can dip your feet into and cherry pick as Dorries has done. I can’t claim to be particular au fait with Singer’s work, although some of you might know that I’ve criticized his stance on animal rights in the past. Second, Dorries says that “a humanist recently commented”, and the most recent citation she comes up with is from 1993. She also tells people they can read more on Singer and directs them to the Christian Research Institute, an evangelical apologetics group. Quite a source!

So far, so much fiction. However, my main beef his her extremely warped thought process. Even if Singer did advocate infanticide, why does that mean that all humanists would agree with him? I find it amazing that Dorries can get away with this stance, because I believe that if she tried it with a religious group she’d be in very hot water. Imagine if she’d said something like this:

How can anyone subscribe to Judaism when Baruch Goldstein was Jewish? He committed a massacre at the Cave of the Patriarchs. It’s scary to think how many people out there hold such extreme views.

Yet when an MP such as Dorries has a go at humanists, no-one bats an eyelid. Perhaps it’s time for us humanists to get just a little bit pissed off?