I’ve made another appearance on the Pod Delusion, this time talking about the return to Twitter of Ricky Gervais. I briefly go over what I consider to be the pros and cons about his reappearance on the Twitter scene. On one hand, he come be a great force for atheism, as he writes very well on the subject, but on the other his behaviour and repeated use of the word ‘mong’ gives many cause for concern.

Sadly, since the podcast went out last Friday, my hopes of reading more insightful articles about religion have been dashed as Ricky Gervais has continued to cause trouble by his incessant use of ‘mong’. I have to say that I for one don’t approve of his actions. The situation has escalated over the last few days, with Deborah Orr and Nicola Clark having their say in the Guardian, the Daily Mail attempting a sensible critique, and most notably fellow comedian Richard Herring having his say.

First off, I need to make this clear: the term ‘mong’ is still a contraction of ‘mongoloid’, and is still widely understood to be a derogatory term for someone with Down’s Syndrome. Ricky Gervais, and anyone else for that matter, does not have the authority to say otherwise. If it had truly fallen out of use, charities such as Mencap wouldn’t be complaining. On top of that, Gervais does use the term to mean ‘a twonk’, e.g. someone who is stupid, so he’s using it as a derogatory term anyway. Using a word that describes mental illness as a derogatory term is a practise that should have been confined to an 80’s school yard. It’s just as disheartening to hear people use the word ‘gay’ to mean anything they don’t like. It’s childish, crass and completely unnecessary. I for one am against it for these reasons, it’s got nothing to do with being jealous of the success of Gervais, as he would like to think.

So why would Ricky Gervais be so insistent on using the word ‘mong’? The cynic in me thinks that it’s just a cheap ploy to get some attention for his new sitcom, or that he just likes winding people up. Perhaps telling him he can’t do something is like a red rag to a bull, and he’s digging his heels in like a petulant child. Some might argue that he’s putting up a fight against censorship and the old right wing war cry of ‘political correctness gone mad’, but he is no martyr. There is no merit to what he is doing. How is the re-emergence of the word ‘mong’ going to help anyone? 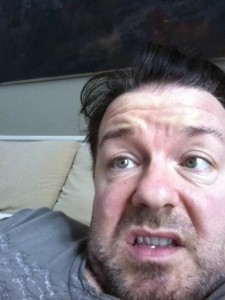 Alright to use the term 'mong'?

I do not consider this to be an issue of censorship. Gervais is free to say ‘mong’ as much as he likes, but in doing so he makes himself less appealing to those who find the word offensive. I also need to spell out that I have no problem with discussing disability, I do not think it should be taboo. For example, Family Guy put out an episode which featured an actress with Down’s syndrome, and the issue was dealt with in a rather frank, albeit strange way. Gervais himself uses a child with Down’s syndrome in the plot of an episode of Extras to great effect.

The most worrying thing about this whole episode for myself is the cavalcade of idiots on Twitter who have decided to defend Gervais by tweeting along the lines of “mong isn’t offensive, you mong” to anyone who says otherwise. It’s a shame because it’s very difficult to perceive such tweets as anything other than a deliberate attempt to cause offense. If you know someone finds a term like ‘mong’ offensive, why would you then use it against them? To teach them a lesson? If Gervais is trying to return the word ‘mong’ to common parlance, he sadly appears to be succeeding.

There are some who think that people like myself are going out of our way to be offended, that we are looking for something to complain about. Not so. I don’t think I need to reiterate my views on why Gervais is wrong to use the word ‘mong’, but one thing I am quite annoyed about is the unfair use of a quote from the great Stephen Fry:

It’s now very common to hear people say “I’m rather offended by that”, as if it gives them certain rights; it’s actually nothing more..it’s simply a whine.

I totally agree that “I find it offensive”, as applied to say, gay marriage or atheism is no argument. There has to something else. As I have said earlier in the case of Ricky Gervais using the term ‘mong’, there certainly is.

Beforehand, I’d always given Gervais a fair amount of leeway when it comes to disablist language. When Gervais said “Is that a mong?” in reference to Susan Boyle in his stand up show Science, I thought little of it. I thought it was to shock, as part and parcel of the arrogant stage persona that Gervais has cultivated over the years for comic effect. However, there is no persona to hide behind on Twitter, and his ugly intentions around the use of the word ‘mong’ are clear for all to see.

NB I won’t be swayed by people saying “I’m 26 and I went to university but I’ve never heard someone use the word ‘mong’ to mean Down’s syndrome”. Sorry, but as a skeptic arguments from ignorance mean nothing to me.