The unveiling of a new national flag often signifies a dramatic change in world politics. It could relate to the birth of a new country (such as the recently independent Montenegro), or a country looking to move on from it’s dark past, for example Rwanda.

Sadly, the recently adopted flag of Myanmar (Burma) appears to be in no way positive. Burma is currently ruled by a military junta that has been in power since the 8888 revolution of 1988. The military government has placed severe restrictions on personal liberties, and the leader of the National League for Democracy, Aung San Suu Kyi has been under almost constant house arrest since the NLD won elections in the country in 1990.

As part of the government’s wide-ranging constitutional changes, the new flag was ordered to be flown nationwide on October 21st 2010, and the old flags were ordered to be burned, in an attempt to further cement and symbolize the power of the government. The flag itself is three horizontal yellow, green and red stripes, with a large white five pointed star in the center. The colors are supposed to represent (amongst other things) peace and prosperity, but they are in fact the colours of Burma’s flag during the Japanese occupation of World War 2. The star is supposed to represent the unity of the country, but it bears a close resemblance to the stars seen on communist flags, particularly that of Vietnam. The new flag is not to be confused with that of Lithuania. 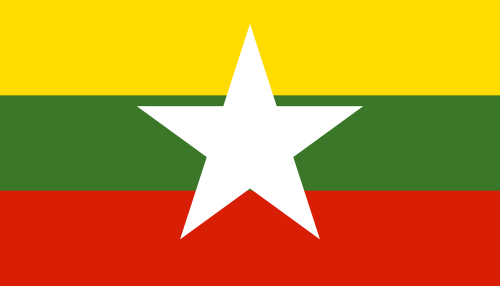 The new flag of Myanmar/Burma

Of course, it is my hope that the military government of Burma will eventually make way for a democratically elected government. Once that happens this new flag will most likely be consigned to history, a sign of brutal dictatorship. I can only hope that this day will come soon.