I really love it when someone with a lack of understanding of a scientific principle learns a little bit about it, uses what little they know to come to a silly conclusion, then treats their conclusion as fact. That could be why I’m a big fan of Karl Pilkington.

Anyway, a cracking example of this has recently emerged from Iowa. Right now, Iowa sounds like a really interesting place to live: last year gay marriage was legalised, and this of course has lead to protests from right wing groups.

Randy Crawford belongs to one of these groups. He is unsurprisingly against gay marriage, and he’s got a very interesting reason for believing gay people are “obsolete”:

“It used to be useful when we were cavemen and we needed people to guard the caves full of women and children. If I’m a guy out hunting, I want to leave someone back at the cave tending to my wife and kids, and I don’t want a normal guy having that kind of access to my wife and kids. So, in our evolution, you can see that there use to be a utility for homosexuality, but that was when we were cavemen and we aren’t cavemen anymore. So, homosexuality is obsolete.”

This is amazing. He’s got absolutely no evidence to back this up, but it makes sense in his head, so it must be true! I wonder if anyone has put him right yet? 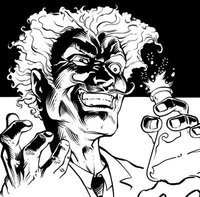 This Tuesday, the first one after TAM London, I will be giving my talk on the Scientific Method at the Liverpool University Guild of Students. I’ve been invited by the HASA society, and the talk is the same one I gave to the Leeds Skeptics a few months ago.

I don’t want to give too much away, but my talk will cover the scientific method itself, how people like quacks and creationists abuse it, and what can happen when it isn’t followed. I also cover randomized double blinded controlled trials, and show how seemingly random data can be manipulated to support outrageous claims.

The venue is right next to the Metropolitan Cathedral, and it would be great to see you there!

Hello everyone! Welcome to my shiny new blog. In it I will talk about all issues of interest to myself, including (but not limited to) skepticism, science, humanist, religion and of course the mighty NCFC. I might even write a series about flags of the world, exciting eh?

Some of you may remember my previous blog, which can still be found at tomfooleryblog.com. I may still update it from time to time, but I found it a bit limiting. It had been my intention to use tomfooleryblog to write about the sillier aspects of woo, but I ended up writing about more serious things like autism and electoral form, so the moniker of tomfooleryblog really didn’t fit.

Norwich to get baked beans and felching luncheonette and it's everything