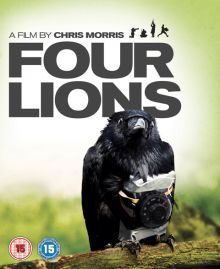 This evening (Sunday September 4th) Four Lions, the début film from director Chris Morris, gets it first UK screening on Channel 4. The film, which tells the story of four bumbling Jihadists from Sheffield, caused controversy when it was first released in cinemas, and the Daily Mail thinks the screening will cause outrage because it’s so close to the tenth anniversary of the terror attacks of September 11th 2001.

So, what’s the film like? In my considered opinion, it’s excellent. I don’t want to give away too much of the plot, but the film presents us with five would-be terrorists who span a very wide character spectrum. The leader is Omar, a sharp, quick-witted yet flawed man who speaks fluent Urdu, who sees terrorism as an answer to the evils of Western capitalism. He persuades his brother Waj, who rivals Father Dougal for child-like stupidity, to join his cause, as well as the naive and shy Faisal, who specialises in training explosive crows to fly into buildings. They are backed up by the white convert Assam al-Britani (who everyone calls Barry), an angry hot-head and founder of the Islamic Republic of Tinsley. Later they are joined by the enthusiastic student Hassan, who’s more concerned with getting back on his media studies teacher than righting the wrongs of the world.

The first half of the film is a straight up comedy, with some great one-liners and comedy situations. However, the whole tone of the piece changes at the half way point. From then on, it is challenging for the viewer, who is fed comedy and thought-provoking tragedy in equal measure. No element of terrorism and counter-terrorism is left untouched by Morris, including the police, politicians and the intelligence services.

Sadly for the Daily Mail, the film isn’t nearly as controversial as they would like it to be. It does not make light of terrorism, it puts it in a very human context. The film has nothing specifically to do with 9/11, anyone who goes on the Mail website and complains about this clearly hasn’t seen it.

I think that the perspective on terrorism that Four Lions offers parallels with the huge amount of good that Morris’ Brass Eye paedophile special acheived. Back in 2001, the right wing tabloid press was awash with scare stories about paedophiles, whipping certain members of the population into a mad hysteria. Even innocent doctors weren’t immune from the baying mob, there was even a case of a paediatrician having “PAEDO” daubed on her house. Then the “Paedogeddon” Brass Eye special thundered onto our TV screens and changed all that. It made everyone take a step back, and the paedophile hysteria disappeared pretty much overnight.

One thing Four Lions does not do is glorify terrorism. Who knows, perhaps a would-be terrorist will see this film and be convinced that they are on the wrong path? Anyway, you can judge for yourselves at 9pm, Channel 4 tonight.